Another Anime/Dragon Ball article?! I know, I know, but trust me, this one’s good. But first, some build-up:

On Day 3 I found myself quite lethargic, as there was just no sense of urgency for it, and I had to dig deep.

I used to have a few rivals to compete against physically, but to tell you the truth, being MGTOW feels like the ultimate victory over them already.

Anything more is kicking a blue-pilled man while he’s down.

I have a regular selection of Vegeta scenes from DBZ that I use for motivation, and some are more intense or thematic depending on my mood.

However, I still wasn’t resonating with any of them, so while laying down, procrastinating, I asked myself:

“Why do I really have to do this?”, and I answered, “Because you agreed to it.”

And so, I started the work out. It was difficult without any extrinsic motivations as well as no clear idea for an intrinsic purpose, but over time my pride and desire to complete the work out developed, and I eventually tapped into a deep-seeded anger within me that led me to completely dominating the work out.

I tapped into the evil in my heart.

Although I was about equal or slightly above my rivals in fitness, I now desired to completely blow them out of the water. And I went even further, including people that weren’t even exercising.

I specifically targeted a few people who were Christians, because I recently came out to my family that I did not believe in the Bible’s interpretation of God or the events about the life of Jesus.

These people claim to have this connection to the Holy Spirit, and yet they continue to make poor financial decisions, are unable to curb their diet, and are generally unproductive with their time.

So there I was, going Super Saiyan, with an M on my forehead, sharp breaths in between reps that I want to kill their God.

“And I have to say it felt pretty good.”

I performed a chest workout the night before, and still felt motivated to show them all the true power of the Majin Spirit vs. The Holy Spirit, but after the workout was done I wasn’t interested in re-watching the motivational videos.

I took a cold shower and realized how big my life actually is, with all the other goals I want to accomplish, and my true purpose and ambition hardly concerns anyone else in my family.

Even during my nightly journal session, I just wasn’t on the frequency to criticize them anymore.

Arriving at Day 4 of the Ab workout, I hesitated to watch the Majin Vegeta video. For some reason, it felt like it was going to require more energy to get emotional about the whole ordeal, instead of turning my brain off and just going through the motions.

Vegeta had always felt that Goku surpassing him was an insult to his birthright as “The Prince of All Saiyans.” But what Vegeta had to realize was that Goku was never gunning for that position; Goku was always in his own lane.

Goku doesn’t even use his Saiyan-given name “Kakarot”. The Saiyan race is effectively dead and Vegeta and Goku are the last ones left, as their children are half-breed. There is no kingdom left to rule.

Vegeta became Super Saiyan when he finally dissolved his ego, and let go of all those external motivations. He had the power level to achieve the state a long time ago, but it was his insecurities and mental blocks that prevented it.

When he no longer cared about that, when his external world crumbled to the point that it nearly got him killed, that’s when his mind was forced to retreat into the quietness of his inner world, and suddenly, he exploded back as a Super Saiyan.

Unfortunately for Vegeta, reaching his goal made his pride multiple times worse than it was before, which led him to taking actions that would heavily endanger himself and the other characters in later arcs.

And so, I will stop where I am now and use his lesson.

I do have emotional issues. Insecurities. Pride. But I have to let it go.

When the workout started to get tough, and the images of the people I was angry at flashed into my mind, I let them go.

“I want to become my own person.” I told myself.

I may not be able to go Super Saiyan in real life, but I can enter a flow state, and it always requires me to lose my ego:

“Jeanne Nakamura and Csíkszentmihályi identify the following six factors as encompassing an experience of flow:[2]

It’s possible that I could continue to use those dark emotional feelings as fuel to power my workouts to incredible heights, like how Vegeta’s fury kept him alive at 450x Earth’s gravity, but I don’t think that power comes free.

What I gain in physical power might result in a trade-off that holds me back emotionally. It would drain me spiritually. And just like Vegeta’s case, it could also end up backfiring and hurt me physically.

I have to thank Immortal Mindz. I feel like he supported my comment because he secretly knew what was coming next.

I won’t dissuade anyone from using these negative forces and external factors to motivate themselves for their goals. We all resonate with different frequencies, and Vegeta’s was particularly dark. He was outer space under a lightning storm and meteor shower for goodness’ sake!

But through the darkness came the bright light of the Super Saiyan.

What do you think? What motivates you during your workouts? Let me know your thoughts in the comments.

A game changer! Not only does it provide you security with Tor browsing and built-in ad, script, and tracker blockers, but you also help protect the users from being de-platformed by building an ad-free future that pays you in crypto-currency for your attention, and not distraction: https://brave.com/moo427

Suggest a new article/video topic by buying me a coffee!

And explore more articles on the Moon Base further below 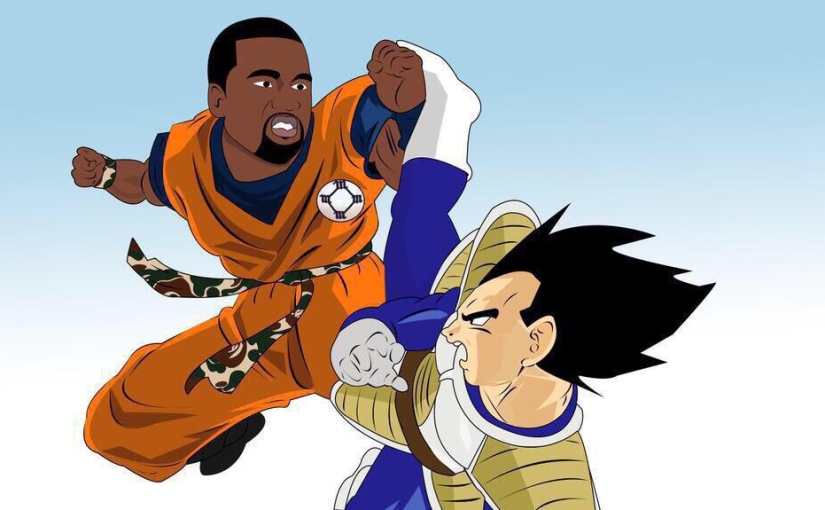 Surprisingly, there are strong similarities between the two couples.

Vegeta and Kanye both have had their “bad guy” phases.

Vegeta attacked Earth trying to steal the Dragon Balls, and Kanye stole the stage at the VMA’s to transfer Taylor Swift’s award shine onto Beyonce.

Bulma and Kim were also “bad girls” in their pasts too, as both women weren’t afraid to show some skin to get ahead and acquire fame and power.

They also come from rich and successful families, specifically their fathers: Bulma being the daughter of the man who invented technology to store any item, even a house, into a tiny capsule, and Kim being born from a nationally recognized attorney father to then having a former Olympic athlete as her step-father.)

As two men who never smile in pictures, Vegeta and Kanye were the last men expected to be the ones to turn these h’s into housewives. But a closer look at their marriages may reveal that these men said “I do” out of strategy and not just sexuality.

First off, and even though most of his race is extinct and he has no subjects, Vegeta does come from royalty, so it makes socio-economic sense for the Prince of All Saiyans to match up with the Princess of the Capsule Corporation, but Vegeta also gained access to exclusive resources through his relationship with Bulma.

The context here is that Vegeta was not only beaten by Goku, but then shown up again as Goku was the first to become a legendary Super Saiyan, which questioned Vegeta’s credibility as true heir to the Saiyan throne.

However, it was with Capsule Corp. technology that Vegeta was able to train under 450x Earth’s normal gravity, and travel to outer space for further development in solitude, which later resulted in him also becoming a Super Saiyan and achieving a power level well above his rival Goku.

Likewise, Kanye was down and out after his failed clothing line venture landed him $53 million in debt. However, Kanye would (allegedly) quickly find relief after sharing a joint bank account with Kim as she cashed out an $80 million check from a successful video game development.

Despite the rumors, stigma, and reputation of these women, both men saw great opportunity in a long-term commitment, and gained access to resources that helped them achieve their goals.

All they had to do was put a baby in them, and the rest of the world would become their play thing.

Although MGTOW men avoid marriage as a strategy to protect their freedom and finances, Vegeta and Kanye managed to marry up and achieve more than they could on their own.

For a group of men that often famously recite “the juice isn’t worth the squeeze” regarding the value of a modern relationship with a woman, on the contrary, Vegeta and Kanye’s cups runneth over after settling into their marriages.

Yes, they did have to bite the bullet settling with post-wall women with storied sexual histories, but nonetheless they upped their social rank and economic ability with this vertical move.

Despite it all, it is undeniable that both Bulma Brief and Kim Kardashian are talented entrepreneurial women, and being the 2nd generation of rich and successful parents, it is safe to call them both “princesses”.

So, MGTOW guys, if women these days aren’t really bringing anything to the table, then only take a seat at the table if the woman already has a full house.

“Where have all the good men gone?” The peasant women will ask.

“Out slaying dragons” A wise man will answer. “They won’t settle for anything less than a princess these days.”

So go your own way, and I’ll see you on the Far Side

Thanks for reading. I’d love having your feedback, and if you enjoyed this content, please consider

Also Download the Brave Browser. Not only does it provide you security with Tor browsing and a built-in ad, script, and tracker blockers, but you also help build an ad-free future that pays you in crypto-currency for your attention, and not distraction: https://brave.com/moo427